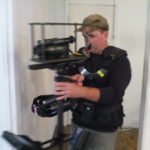 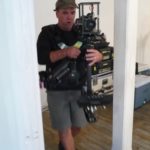 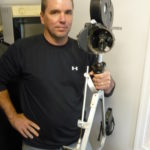 This is one of the first steadicams, invented by Garret Brown

It has been over 2 years since I attended the Steadicam Operators Workshop .

At the time, I had steadicam mini and had been toying around with it for about a year and thought I was a pretty big deal with it. I wanted to move up, so I contacted Steve Fracol and asked his advice. He made it very clear that if I was serious, I HAD to attend a SOA workshop. So I did.

I look back at that week as a life changing event. Not only did I make the decision to invest in a rig, but I was reminded why I entered the business in the first place. Jerry Holway, the lead instructor, has a passion for camera movement. Like a great coach, he inspired me and pushed me. I went thinking they would view me as the messiah of the steadicam. 2 hours into the first day I was totally broken, it was a painful lesson in humility.

As soon as I would feel like I was close to a breakthrough, we would move on to a new drill, I was always one step behind. On day 2, the inventor of the steadicam showed up to teach. Garrett Brown  is one of the coolest people I have ever met. There is a long line of teachers that have helped me, and he is high on the list. By day three, I was a full convert and knew that I was going to make the jump and buy a steadicam. I put the word out that I was actively shopping, and Garret pulled me aside and asked if I would like to go by his shop and see what he had. It was like I was being invited to the mountaintop. His shop was the living history of the steadicam, and on a workbench, was the arm he wanted to sell me, dismantled and in about 1,000 pieces. He assured me he would re-assemble if I bought it. After a completely feeble attempt to haggle, I made the deal.

The workshop was far more that a “nuts and bolts/ how to operate” workshop. At night, we would watch steadicam shots, both great and bad and discuss why a camera should move. The spirit of inclusion, and the desire to share the craft was contagious. I now consider myself an evangelist of camera movement. That week was one of the best of my life. I highly recommend it to anyone considering operating a steadicam. Max will go soon. I want him to be the youngest attendee ever, and I want Jerry & Garrett to hammer him as hard as they did me.